Solution to the Revolution

Previous Next
Solution to the Revolution

Solution to the Revolution

“General Bonaparte at the Conseil des Cinq-Cents at Saint-Cloud” by: François Bouchot, 1799

There is a power, but only one power, that shuts down revolution. This is Christianity.

Christianity is the most extreme opposite of the sins of the revolution. For it bases all of human life on God’s order and providence. But Christianity is simultaneously the most profound satisfaction of the impulses [otherwise leading to] revolution.

Only Christianity is still capable of guaranteeing the social order after the great masses have reconsidered its foundations, as well as those of monarchy, property, and marriage, and called them into question. Only Christian purpose has established for us joyful devotion to king and God, to marriage that God has joined together, to the occupation that God has assigned us, to the distribution of goods that God has provided. Christian purpose does not call for a governing authority that it establishes for itself, for a constitution it has made on its own, for law that it discovered out of its own reason. It would much rather receive all this from divine administration, and it is content with contributing its modestly small portion to the grand design of the times, as God has assigned it.

But Christianity is also [the] only [force] capable of fulfilling the real aims of the time, real progress. It is the only source of the principles from which one may expect a satisfactory construction of society – freedom, equality, fraternity in their true essence.

From Christianity comes genuine freedom, whereby man acts only out of his innermost self and according to the gift he has from God, and is not a judge over human governing authority, and yet at the same time [Christianity emits] commitment to God’s orders, toward which true freedom itself immediately strives as if homeward-bound.

From Christianity comes true equality, whereby in every human being the likeness of God comes into its own right and privilege, which is higher than chivalry, and yet at the same time [Christianity emits] a position of membership for everyone, which carries along with it a diversity of rights and privileges.

And from Christianity comes genuine fraternity, which does not, as in socialism, boastingly celebrate the human species in every human being, but rather humbly loves the individual with heart and soul, and therefore [Christianity emits] compassion with the plight of the people, without fraternizing with sin and the depravity of the people.

Christianity grants the most precious of all political ideas, the idea of the vocation [Beruf], that is the calling [Berufung] from God. In this idea the opposition between right and duty, power and restraint gets resolved. When the proletarian maintains that he has the right to vote and be elected to a legislative assembly, like everyone else, he is asked if it is his calling from God to legislate; and when the large estate owner says it is right to enjoy the fruits of his property, and no public duties may be imposed upon him for the inhabitants of his estate and his poorer neighbors, he is asked if that is the calling for which God has awarded him such a large estate.

Christianity establishes the communion of the Holy Spirit, which, as a moral power and as a reciprocal guarantee of the divine order, even sets standards and commands respect over governing authority, genuine popular sovereignty.

Indeed, Christianity is above all the power that redeems and blesses individual human beings; only it is also the power within the nation from which alone [a] genuine constitution and genuine freedom arises. Christianity gives rise to the longing for one great community, which is a realm of the Lord, a protection for all personalities in their freedom and their purity, a harmonious joining of all gifts and vocations into one body, an application of divine justice and holiness – a type of community that fulfills that heavenly message which is also the final aim of the state: Glory be to God on high, and peace on earth and good will to men!

Therefore, since Christ appeared on earth, there has not been a gleam of political freedom that has not received its aura from the center of Christianity. The German Empire during its loveliest periods of freedom was based on Christian faith. What one now admires as political freedom, England’s constitutional monarchy, North America’s democracy, are the work and product of the Puritans; and while the Puritans were certainly not free from profound errors, from revolutionary tendencies, which also adhere to both of these celebrated constitutions, they were driven from deep inside by a longing, within their community and in their national life, to build the realm of God and proclaim the glory of His name. This is the soul that they breathed into their political creations and that has maintained the existence of the American and English constitution to this day. And even the three eastern [European] powers that pledged themselves forty years ago to an alliance against the revolution on the basis of Christianity are not in any way prevented from granting to one another the complete development of political freedom, depending on the educational level of their people on the basis of divine order; and, regardless of this, they can lead the holy struggle against that empire that is based on human will against God’s will, whether it show up in one form or another.

Only Christianity is capable of shutting down the revolution. For Christianity is the archetype [Urbild] of that realm of freedom of which revolution is merely a caricature [Zerrbild]. But where the archetype is consumed in the light of its glory, there the shadows of the caricature must fade. For that reason, too, the revolution will not be shut down, because the archetype of Christianity is never consumed on earth, but instead revolution can only be suppressed, have a foot placed on its neck; but it will never cease its rebellion, and when the guardians slumber, it will rise up. In the same way that Amalek was suppressed by Israel in battle, but immediately rose up when the praying hands of Moses fell. Therefore there will be no return to the time in which governing authorities might nonchalantly give themselves over to their injustices and vices, their inclinations and hobbies, their rivalries [other] than in profound tranquility and under secure rule. The enemy of human society is girded and threatens to fell society when it leaves the fortress of divine protection by sinning against its divine vocation. And we, too, who live as subjects in this era, are already surrounded by divine tribunals on our earthly passage. We, too, dare not close the wakeful eye and take off the armor; for all of us are called to be guardians and fighters against revolution. Revolution is indeed a realm of sin that permeates all of human life and human essence. The fight against it does not stand still at the barricades and in the parliaments. Everyone who professes faith in Christianity and leads a life of God-fearing, of loyalty toward king, of contentment in his profession, of cultivation and love – he wields gigantic blows against the revolution. Christian faith and the Christian creed have the eternal promises on their side. The double-edged sword of God’s word, even from the meekest mouth, will penetrate the rock-hard armor of the revolution. But these promises are linked to a condition: to Christian loyalty.

Whoever wants to break with the revolution must first break with his own sin.

Nobody can fell the enemy in the world unless he first fells him in his heart. Christian loyalty is the thoroughgoing, complete break with the revolution. Therefore may God provide that the princes among the nations do not depart from the fortress of his care and the guardians do not slumber and the fighters do not grow weary, and that the praying hands of Moses do not fall; and may He provide that we stay loyal, so that we may be contrived as victors in the early dispute and in the eternal decision. Let it come true!

Friedrich J. Stahl on What is the Revolution? 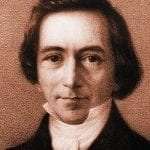 Friedrich J. Stahl was a Lutheran legal theorist, who was the first to codify and systematize a Burkean concept of law. His works on the philosophy of law and state have long impacted the Dutch neo-Calvinists, and today being made available in English.

A Theology of the Home and Home-Building
Only when man takes responsibility for his sin in destroying his home, his resting place, can he accept God’s plan of rebuilding it: a theology of home.
The Reformation Principle
If we are to defeat the Revolution, we must have the Gospel stripped of all hindrances and set free from the superstitions in which Rome has sunk and distorted it.
Kant, Burke, and the French Revolution
Providing some insight into Kant for the philosophizing theologian, the 1789 revolution was a laboratory for Kant; seeing his theories put into practice. Read how Kant's former students, influenced by...
Conservatism and Sola Scriptura Part 1: The Principles of Conservatism
How Sola Scripture fits with the principles of conservatism is the thread of our life tapestry. It keeps us together, guiding us to keep our paths straight.
2019-11-04T23:11:55+00:00By Friedrich Stahl|Conservatism|
Toggle Sliding Bar Area
This website uses cookies to improve your experience. We'll assume you're ok with this, but you can opt-out if you wish.Accept Read More
Privacy & Cookies Policy
Necessary Always Enabled